Commonly known as "that spreadsheet nerd".  Creator of the "7 Days Later" and "Fixing the Meta" blog segments. 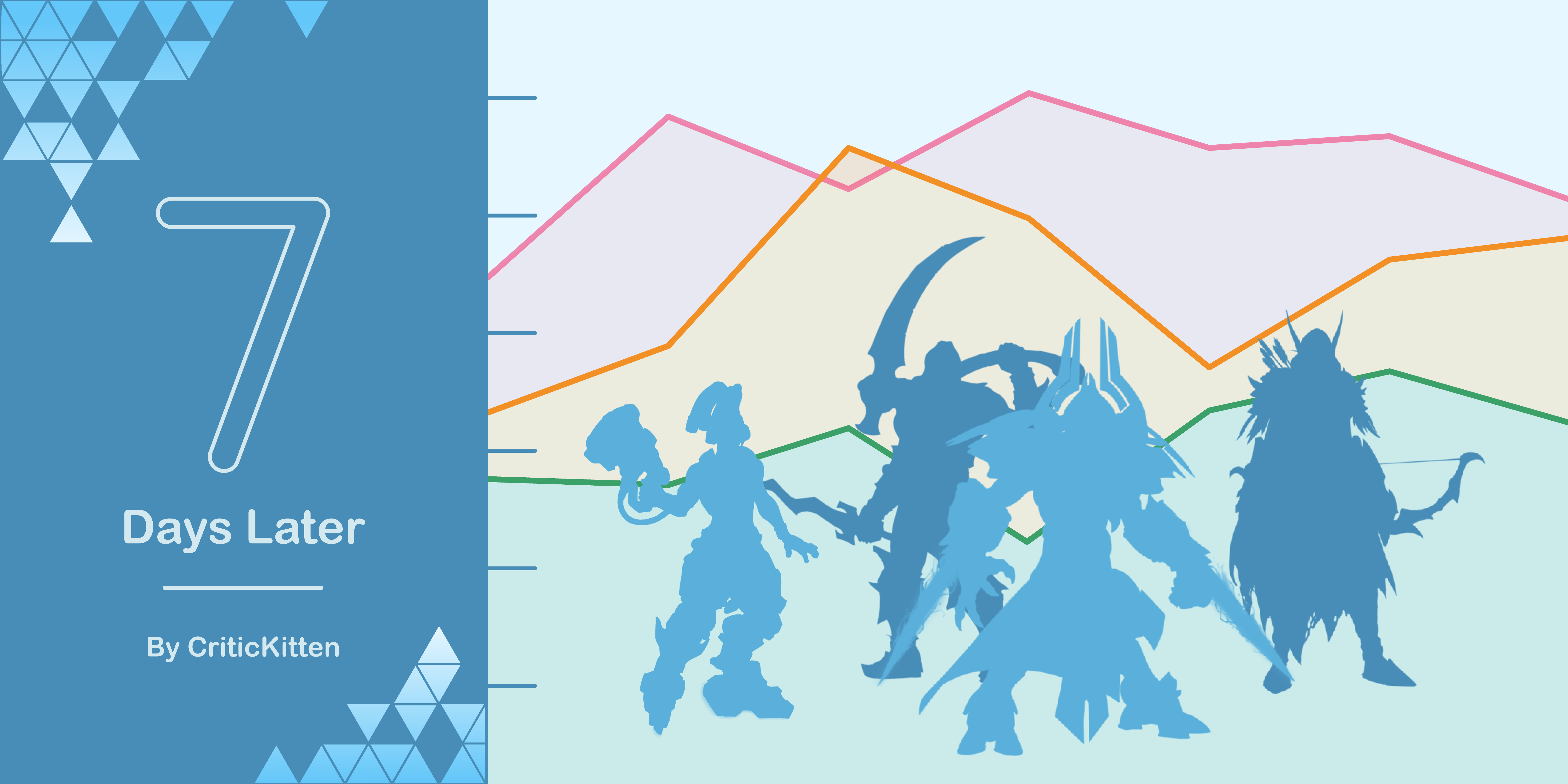 View the previous post on HeroesHearth here.
View all of my previous blog posts here.

Hello again!  After each balance patch, I've taken it upon myself to track how the balance changes have affected the Nexus.  It's become something of a habit for me, and I thought it might be fun to share my data with the community.

In case you've forgotten what changed in the last patch, here's a link.

Disclaimer (please read!):
All data provided in this post was collected from Hotslogs, which is a database of player-submitted games.  Data was collected between 3:30 PM and 4:30 PM EST each day, using the special filter "Last 7 Days (Current Build)".  As usual, keep in mind that my numbers may differ slightly from Hotslogs's "official" figures as the site regularly updates older information as more games are added. Therefore, our data may not match up perfectly, but it should give a generally accurate view of how the week progressed.

Here is a table showing the win rates, pick rates, ban rates, and overall popularity of each hero in Ranked and Unranked play: 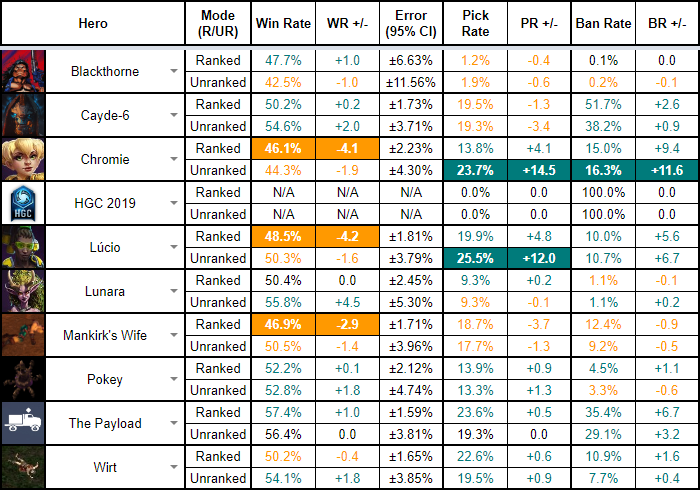 Remember, only the heroes whose win rates are highlighted blue/orange with white text have exceeded their margin of error.  Heroes which do not exceed the margin of error are considered to have too little data to confirm that they have changed in any significant way.  Note that the error column assumes a 95% confidence interval.  To put it simply, a 95% confidence interval is a numerical way to measure whether the win rate has changed in any significant way.  If the change to a win rate exceeds the error, then we can assume that there is approximately a 95% chance that repeated tests would confirm the true value lies within the bounds of the confidence interval.

The seven-day analysis is below.  Please note that while I try to cover all heroes, not all heroes are in need of in-depth analysis of their changes, so some heroes may have short summaries or may even be omitted entirely.  Also, be aware that the contents of this section are primarily my own opinion of the changes, albeit backed with data.  If you disagree, feel free to explain why in the comments below.

1) Blackthorne is still fairly low in terms of general play, though this may be largely due to players still not knowing that he exists.  Blackthorne's arrival in the Nexus many months ago was not a particularly glamorous release, to be sure, but it seems as though a large percentage of the player base is still unaware that this hero was released at all.  His unique style of play is also something of a hindrance, as not many players are used to playing HotS as a 2D platformer, although reviews look favorably on his simplistic kit that largely revolves around different ways to shoot things.  He may be due for a future rework to expand his niche into one that works better with his teammates, although many Blackthorne mains prefer to work alone.

2) Chromie's rework provides greater flexibility for her kit overall and is closer to being a less "frustrating" hero, but she will need some of her power returned to keep her at an even win rate.  Chromie's new settings allow for her to have a greater degree of battlefield control with her Time Traps, while also elevating the level of skill required to get that effective use out of them.  This, combined with her overall lower early burst damage, is a welcome trade off that should reduce her previously frustration-inducing kit.  However, my personal experience suggests that they may have trimmed a bit too much of her overall power, and her win rate in ranked play seems to reflect this.  I believe that this is most likely due to changes in her timing on Sand Blast as well as the more spread nature of her damage on Dragon's Breath.  My recommendation is slightly increasing the speed of Sand Blast, though not quite to its original levels, as well as a bit of tweaking to the cooldown on her Dragon's Breath.  With these changes, I think she would feel a bit better and should rebound fairly quickly.

3) The loss of baseline power on Crossfade may have been too much for Lucio to overcome at lower levels of play, even with the addition of a new trait and heroic.  Changes to Lucio's kit are generally pretty welcome, given the hero's struggles to remain both balanced and competitive.  While the latter isn't as critical any more, it's still good to see him freshened up with a new heroic, although how well it'll fare is debatable when it faces off against a heroic as powerful as Sound Barrier has often proven to be.  To date, his ranked success has dropped off somewhat, likely due to the significant reductions in strength on Crossfade.  However, it may be premature to start rushing buffs onto his kit, given that his redesign has provided a number of newer builds (including one that many feel is rather "assassin-y") that have yet to get fully worked out.  However, should he not continue to improve, a slight return of power to Crossfade would probably help a fair bit.

5) Mankirk's Wife leaves fellow team members struggling with frustration.  The addition of Mankirk's Wife was not without its controversies, especially when it was announced that she would be heavily focused on the role of a split-pushing hero.  Her kit's very low emphasis on mobility of any kind leads to many players dedicating themselves to constant solo lane pushing without any regard for objectives.  It is not uncommon for a team with Mankirk's Wife to end up in a lot of 4v5 situations during objectives, leading many to cry out in team chat "Where's Mankirk's Wife?" when the fight inevitably doesn't go their way.  Fortunately, the developers have recently announced upcoming future nerfs to Chen to help compensate for this problem, so hopefully she'll be getting well soon.

6) Pokey's rework showcases the kind of out-of-the-box thinking that more reworks need.  When Pokey the Spine Crawler first debuted in the Nexus, there were a great many complaints about her very single-minded design.  It seemed that Pokey's kit was designed solely to poke at things with her large spike-tipped tentacle, almost as if some thoughtless being had expressly gene-spliced her for that sole purpose.  This didn't really do a great job of showcasing all of the potential there is in a Spine Crawler hero.  Fortunately, the rework to Pokey is absolutely incredible.  Now not only can she poke things, she can also move around the battlefield by uprooting herself and moving to a new location, which she can then root herself at.  This allows her to provide much better support to her team mate in the early stages of the game, instead of only coming online in the late game when the enemy team is attacking the core, which used to be the extent of her reach.  This, of course, will also increase her ability to soak by allowing her to actually be near minions when they die.  Hopefully this sort of creative thinking is applied to other reworks in the future!

7) The Payload remains by far the top Healer in the game.  Attempts to nerf The Payload from its dominant position atop the meta have met with very little success, unfortunately.  Introduced rather recently to HotS, The Payload has proven to be the ultimate healer hero with its absurdly strong defenses, almost akin to that of a tank hero.  At times, it almost seems like it's immune to enemy fire.  In addition, it doesn't help that the enemy team often seems afraid to dive The Payload or even to get on it at all, allowing The Payload to safely dole out protection to its team during tough lane pushes.  Here's hoping that a future patch will continue to bring its numbers down.

8) Wirt's win rate has changed little, though he remains a top competitive selection for teams seeking to strengthen their carry.  Wirt brings incredible and undeniable utility to the game in the support role by offering up his own leg as a substitute weapon for the team's damage dealers to use.  Many pros have taken to using the hero in order to super-buff their team's carry.  And while the loss of his leg doesn't exactly do wonders for his own mobility, it turns him into an absolute monster for defending control points and captures, as you can't kill a hero who is already dead.  Furthermore, it isn't easy to remove his corpse from the control point without some sort of displacement ability, limiting the enemy's possible hero pool considerably.  Critics of Wirt players will commonly retort that a hero with this sort of design doesn't require much in terms of skill from the person playing Wirt, but the game's North American scene has grown to love this simplistic design for precisely this reason.  We'll have to see how these differing opinions clash in future tournament play!

9) Hope you had a lovely April Fools.  I figured that this would be a great time to have some silly fun, given that the 7-day report just so happened to fall so close to April Fools.  Yeah, it's not technically April Fools any more, but it's always nice to lighten up the mood a bit, in my opinion!  In case you were wondering, yes, the numbers for Chromie, Lunara, and Lucio are real, as are the reports that I wrote up for them, so this is still an accurate report of what happened in the last week and my thoughts on what further changes may be needed.  Feel free to let me know what you think in the comments section.  And I hope you enjoyed having a bit of fun with me today!

Looking for more of my work?  My last article discusses concerns about snowballing and the "passive meta" that the new changes may bring if not handled properly.  That article is located here.  Feel free to let me know your thoughts to this article in the comments section below, or on Twitter at my handle @CriticKitten.  I look forward to your replies!