2 Phase Fight - Gauntlet, then primary boss
Your raid needs to be split into two groups to complete separate gauntlets. Each side has a mini-boss to fight. The goal of each team is to follow their mini-boss through its respective hallway, and kill it. Each gauntlet features one ability unique to it, several abilities shared by both mini-bosses, and several traps used by each side of the gauntlet. Once both teams have completed their side, you engage the primary boss. As you go through the gauntlets, there will be one point to pick up a series of powerful buffs, without which the boss is impossible. Phase 2
Note - You may need to adjust when Spirits of Gold spawn, if you aren't able to kill them before they reach the edge. If this is the case, have Ranged DPS kill them off, ensure nobody gets too close to Topaz players. Recommend putting raid markers on the ground for Topaz player positioning to mark where other players shouldn't go. Split raid into two groups, one left one right. Go down assigned hallways, kill mini-bosses. Dodge fire lazers, fire eyebeams, fire on ground, frontal cone smash, frontal cone fire (right side) and run to a wall with electric debuff (left). 4th room healers need to use a CD, big raid damage. 7th room, pick a gem. 1 healer per side take Amethyst, other healers take Sapphire. 2 DPS per side take Topaz, 1 DPS per side take Ruby. Rest of DPS take Opal. When mini-bosses die, attack main boss. Stack in melee. Liquid gold debuff, get to edge of room, then get back into melee. Spirit of Gold adds stun when they spawn, AoE nuke asap. Don’t stand in swirlies.
Lust either when you pull Opulence, 30s after pulling Opulence, or 1 minute 30s after pulling Opulence. The longer you wait, the higher potential damage from Lust is, but higher likelyhood of having people dead. Risk v reward. What works for you will differ from group to group.
Healers - Amethyst healers must ensure 100% uptime on Shadow buff to whole raid. Pop CDs during Wailing Greed, starting on 3rd cast.
Tanks - alternate soaking hits of Coin Sweep, based on who’s gem shield is up, ensure use of AM.

Top
Links to rest of guide: 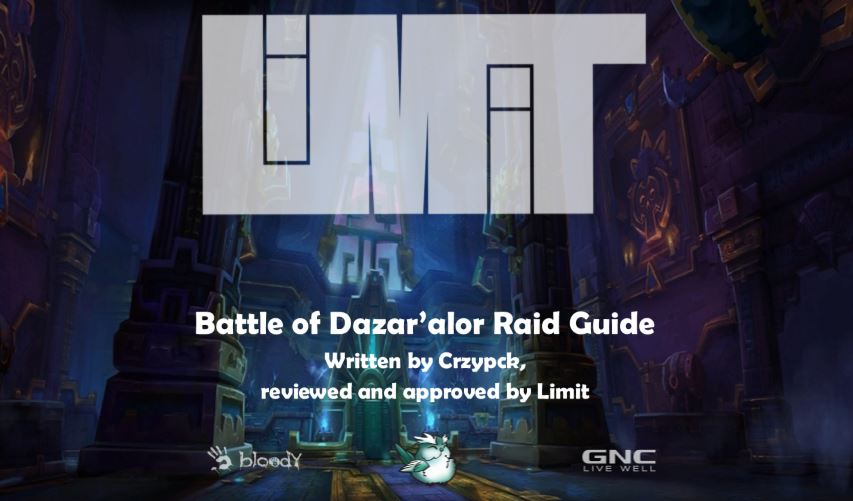